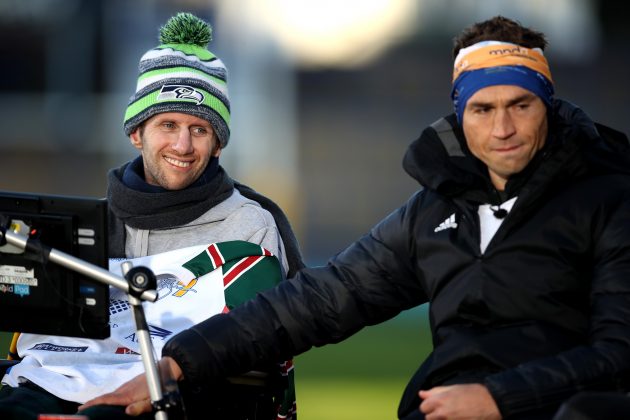 Leicester Tigers defence coach and rugby league legend Kevin Sinfield has completed a gruelling 101-mile run in 24 hours to raise funds for motor neurone disease research and for a centre in Leeds. Making out from Welford Road in Leicester, he made his way to Headingley – home of Leeds Rhinos where he and best friend Rob Burrow played for so many years.

Burrow – who who was diagnosed motor neurone disease in 2019 – was waiting for Sinfield in Leeds, at the end of a run that has raised over £900,000.

Sinfield raised £2.7m last year by running seven marathons in as many days. As he told told BBC Breakfast at the finish line: “It’s been a real team effort from all the crew and I wouldn’t have got it done without them.

“The support along the route has been incredible right from the start. It was certainly a battle – we wanted a battle and we certainly got one.

“Rob knows how much we love and care about him. For those really dark moments you have to think of Rob.”

You can still donate now by clicking on the Kevin Sinfield – The Extra Mile Challenge page.

According to the page: “Your support will be split equally between the Leeds Hospitals Charity appeal to build the Rob Burrow Centre for MND supporting people living with MND and their families, and the MND Association which funds multi-disciplinary care delivered at the Centre and others across the country, as well as research into potential treatments for the disease.”

What an incredible effort and what a friendship Sinfield and Burrow have.

Download the digital edition of Rugby World straight to your tablet or subscribe to the print edition to get the magazine delivered to your door.

Backstage News On The Rock Not Appear At WWE Survivor Series